Actor Andy Griffith, who won the hearts of 1960s TV viewers with his role as gentle Sheriff Andy Taylor in “The Andy Griffith Show,” then returned as a 1980s country lawyer in “Matlock,” died Tuesday at 86, according to WITN-TV. 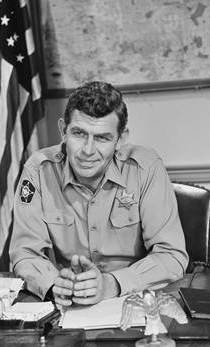 A lot of us soured on Andy in recent months because he let himself be used as a shill for the execrable Obamacare, but, hell, anybody can be allowed a foolish choice or two when dotage calls. "The Andy Griffith Show" remains one of our national treasures. Yeah, yeah, it offered a highly idealized portrait of a small-town America that never really existed, but are we really going to start holding TV to some kind of reality standard at this late date? There never was an American family like the Cleavers or Ozzie and Harriet, OK, we get it, so just shut up about it. And sorry to shock you, but "Gilligan's Island" doesn't exist, either.

Griffith's genius was that early in the show, he decided to drop the good-ole country-boy routine he'd used in his standup act and instead become the straight man who just reacted to the town's oddball characters. That wise choice alone gave us Barney Fife, and how dreary would this world be without him! "Nip in in the bud, Ange. Nip in the bud!" Barney is the essence of the officious, puffed-up functionary on a power trip. Who doesn't know exactly what is meant when somebody is called a Barney Fife? Back when there were such things as newspaper staffs, I actually had a deputy editorial page editor. One day I introduced her to someone by saying, "We let her have one bullet, but she's not allowed to take it out of her pocket." Strange thing, she didn't seem to find that funny.

Wouldn't want to say I was a huge fan of the series, but I did go out and buy a book that amounted to an encyclopedia of the show and read it more than once. It gave the history, the bios, the symbolism, the sociological and psychological underpinnings, all of that and more, including plot summaries of all 249 episodes. One time in Michigan City, my wife and I had a party to which we invited my newspaper friends and her library friends. Sometime during the evening, one of her snotty library colleagues picked up the book and started reading from it aloud in this phony, sneering academic voice. He told me later he was making fun of an academic taking a TV show seriously, but at the time I took it as an attack on my taste. One does not berate one of his wife's friends in front of his friends, so I just fumed and behaved very badly. For the rest of the party, I was a real jackass, and, eventually, a drunken jackass. I could have used a little gentle-wit talking-to from old Ange.

For anybody who just thinks of Andy Griffith as a comedic talent or remembers him mostly from his swan song on "Matlock," I highly recommend "A Face in the Crowd," the Budd Schulberg-written, Elia Kazan-directed smackdown of early TV. It's Griffith's screen debut, and he gives a stunning performance as one of the creepiest, most detestable people you'll ever see on the screen. The cast also includes Patricia Neal and Walter Mattheau at the top of their games.