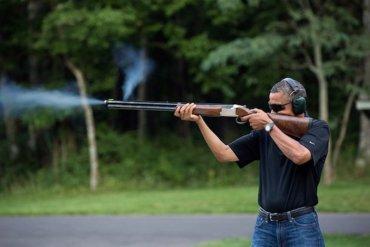 Complicating things for the White House, the president made the skeet shooting statement while pressing Congress and the public to support gun control measures following December's shooting at Sandy Hook Elementary School in Newtown, Conn., which made it seem, some felt, like a PR move.

Posted in: Politics and other nightmares

I wonder why the  president isn't shooting smokeless shells like every other trap/skeet shooter.  There is no ready explanation for the puff of "smoke" coming from the side of the  barrel as no gasses escape there.

Photshop can be a wonderful thing.

Can you imagine, after the crash, as the adults begin to rebuild this country how many times the question will be asked "How on Earth could that many people have been that brainwashed?" Future generations will laugh hysterically that a majority of voters actually thought they could spend more than they take in forever and ever....

What a bunch of gullible rubes the majority of the country is!  Thank God there's an enlightened minority view voiced by the losing electorate to tell us what's really right.

Hubris: The word indicates a loss of contact with reality and an overestimation of one's own competence or capabilities. That's the sin you guys suffer from.

On the contrary AJ, the hubris is in thinking 2+2 = 6 trillion...to ignore all reality like the sloth's and recipient class does is still educable, but that's not the case with you already highly educated liberals, you know in your own mind 2+2 is still 4, but you'll lie through your teeth and argue all day it isn't and there is some magic liberal bullet out there that will keep money flowing when the sad truth is this whole house of cards is gonna crash..It's a mathematical certainty.

Jeez, Andrew, Obama won a second term to by 3-4 percent, and G.W. won his by 2-3 percent, yet you talk as if there's an overwhelming rational majority and a tiny delusional minority. Or did you suffer in stoic silence when Bush won a second term and after liberals got that terrific shellacking in 2010? Somehow, I don't remember it that way.

After he dispatched John Kerry in 2004 by a smaller margin (51 to 48 percent popular vote edge) than Obama, President Bush nevertheless said: "I earned capital in the campaign, political capital, and now I intend to spend it."

Guess it's all in your perception.

The issue isn't whether Obama feels empowered to pursue his agenda -- of course he does. The issue is whether he is right and how unwilling those of us who think so are to just shut up about it.

The majority of the country believe he is right and the majority of the country didn't buy the other guy's message. Comments of intellectual superiority by the minority side that believes it knows better than the rest of us is a big reason why the Republican Party is fossilizing itself into obstructionist obscurity. Instead of working with a vision of America and it's economic future the voters decided on, comments like Tim's do nothing for consensus building. Let's see, Leo, how your GOP supermajority in Indiana will listen to the other side. Or as you said, "Those of us who think so are to just shut up about it."

Andrew, I didn't vote for Obama so much as I voted against a slimeball that couldn't answer a question the same way twice, even if the question was "Boxers or Briefs"?

That's how I deal with most elections: I don't vote for someone, I vote against the other guy.  I voted for Obama the first time because he seemed to be first candidate that was (half) black that wasn't scarier than the dickens.  Having been elected, he would do his best to keep the White House free of drugs and other scandal, in order allow other non-whites to reach the top.

I haven't been at all happy with everything Obama has done.  He needed to pull out of Afghanistan and Iraq within 90 days of taking office and he needed the DOJ to start putting the banksters un prison within a year.

There's only so much that the president can do, but if I'd have been elected to the White House, I'd have united the Democrats and the Republicans:  they would both have been chasing  me, with the only argument being who gets to carry the noose.