Andrey Makarov starts in goal; Kaleigh Schrock and Matt Carter sitting out with unspecified injuries. Matthew Miaone makes his Komets' debut wearing No. 14. Jeremy Gates is also not out for warm-ups, but I haven't heard an official reason why.

Former U.S. Olympic gold medal winner and four-time Stanley Cup champion Ken Morrow is also in the building. Has anybody ever had a better start to a pro career?

The Wings are wearing special jerseys to commemorate their mascot, at least they are in warm-ups. These are their Sunday home jerseys. 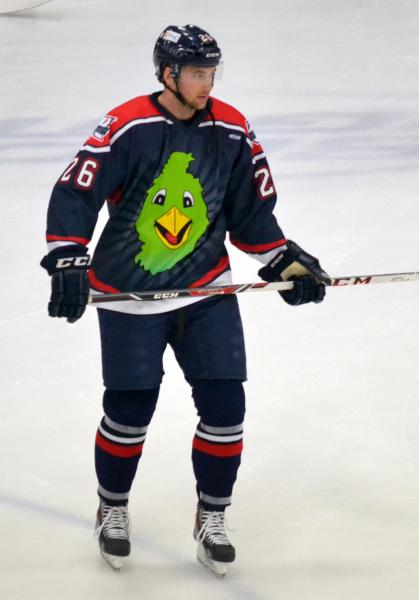 Zero effort from this team

Hmmmmm....2 goals in first 14 minutes...seems we have a problem with the non road goalie & our defense.....sad....we cannot count on others losing 2 get into the playoffs.

Why did we get rid of Fireman again?

Dear Bob..coming home 2 play is not a benefit 4 us....winning only about one in there...another sad stat....

Carter has a pulled groin and is out a while, Schrock has a shoulder strain and is day-to-day, Christian Ouellet will try to play next weekend after a leg infection and Jason Dale's groin may not allow him to play the rest of the season.

Dean Ouellet didn't come back out for the second after taking a big hit near the end of the first.

Dean Ouellete is sitting with schrock and Carter. 2 soft goals given up by the komets.

Blake...listened 2 your interview w/Chase..he commented on Meisner having a bad game & I was waiting 4 u to say more...based on your goaltender comment????

As a goalie who has played for 40 years, i must come to the defense of our goalies.

Meisner - ranked 9th overall in the league, the highest ranked, non-signed rookie in the ECHL. Goalie of the week last week, runner up for goalie of the month last month and numerous runner-up for goalie of the week. Has a 10-4-2 record with the K's. Has had 3 shut-outs this year - only two goalies in the league are better. What more could you ask for? Anybody can have a weak game and this is only the 3rd time he has let 4 goals in - all the rest where 3 and below (with Fort Wayne).

Makarov - ranked 18th overall in the league. While his stats are not as high as Meisner, he is a very young rookie and was dealing with the team during a very unsettled period. It is also a very big step from the WHL to the ECHL. He is very talented but needs time, and coaching, to achieve his potential. Complaints about his rebound control could be helped immensely by adjusting his hand position and stopping his 'fade in' on shots. Goaltending coaching and practice could fix this problem - criticizing the result with addressing the root cause will not.

This is a great goaltending duo with great potential. Try looking at their body of work rather than looking at a few games.

You should have seen the goals this weekend. At this point in the season, and especially when you team is short-handed, those type of goals should not be going in. Buffalo's goalie coach has been in numerous times to work with both.

A goalie coach that shows up "numerous times" is a not much help. To change a goalie's muscle memory requires hundreds of correct repetions, which takes many weeks and constant correction and monitoring. And these coaches really don't work with anyone other than the contracted goalie anyway. And don't make it sound like Buffalo sent their NHL coach. He is just someone that tools around the lower levels and does other jobs for them.

And at this point of the season, fatugue is really setting in. That is why some soft goals go in. If it happens game after game, its a problem and you rest your player. But if it only happens infrequently, that's just the game. Remember these guys are still very young in goalie terms. And how can you hold a goalie to a 'no mistake' standard when every shot they face is by definition a mistake, or series of mistakes, made by the other players. No mistakes - no shots. And if any player in this league was that good they wouldn'y be here. This is still a development league.

Not holding them to no mistake standard. Holding them to why do you always keep making the same mistakes every game standard. I've got a story coming on Tuesday which explains some more about this. And neither of them has played as much that physical fatigue should be a big factor. Mental, maybe, but they are big boys being paid to do a job. Just like in football it's the quarterback, in baseball it's the pitcher and in hockey it's the goaltender. Some of these continued problems are really horrific.

Sad part is I think both have amazing potential if they can get these problems fixed.

Whoa - now the problems are 'horrific'. If you really think that then there really is no way to reason with you.

After 24 years of covering goaltenders, probably not. Goaltending is not the Komets' only problem, but it is the primary one. Over the two games this weekend, I think any semi-objective fan would agree or at least consider that the Komets out-played the Wings. The Wings won because they had better goaltending. Are they more experienced? Yes. They are also just better. I know Komets goalies are 20 and 23, too, but this team doesn't have time for them to mature quickly enough, and it's as simple as that. That is a big problem.

Like I said, I'll have more on this for Tuesday. You may be surprised by what I found.

I've watched a lot of things for 24 years - certainly doesn't make me an expert.

As I said before - I've played for 40 years and am still doing so. I have a coaching certificate and coached goalies for 10 years. If you want me, or any goalie to take you seriously, please provide your credentials.

Have a nice night, Andy.

The 2 goals in the 3rd on Saturday were AWFUL.  I didn't have a great angle on Sunday, so I'm not going to comment on those.

I really don't think you can fault the effort out of the K's either day.  Sunday, I thought there were times where they should have controlled possesion instead of trying to make low percentage passes.  One of those times was during a delayed Kalamazoo penalty.  Instead of a drop pass, to set up some sort of net prescense and movement, someone tried a cross ice pass through 3 Kwing bodies.  Shaf got a bit animated with that.

Eight goals on 48 shots against over the weekend.

We can cherry pick all day, but you will loose the stat battle - Meisner  is 2.24 and 0.923 with Fort Wayne. Would be ranked 7th if Utah was not in there. Read that again - there are only 6 goalies in the league with better stats that Meisner since he joined Fort Wayne.

And unlike you, just because York had a bad game, I'm not going to call him 'horrific' as you did our goalies!

Blake - I'm bowing out of this conversation. I look to past performance  over time to indicate future possibilities, you seem to prefer their last game.

Have a nice day and it's been interesting. Players read, or hear about these things and all the negative talk is not going to help them or the team.

The players are so happy they shoul be playing well.

Can not say so much for most of the fans. I do know if I had perfomed on my job the way the players play most of the time I would have beeen looking for a job.

I think the Frankes are getting by as cheap as the can until the can unload this team.

How could anybody in his right mind buy a fifth-place team?

Fifth place?  Why in the world would that matter? This is a transient league.  Players are here, then they are gone.  As long as you have a faithful fan base ( and I would contend that Fort Wayne does), your chances of succeeding financially are dramatically increased.

Finally, and unless its just plain ego that makes an owner, the profit and loss statement seems to have a lot of advantages other franchises do not... and its automatic with this franchise.

If this franchise was truly for sale, the Franke's would hold the "trump card".  They would be the "seller" and the "buyers" would line up.  Maybe not with every minor hockey franchise...but this is an exception.

Maybe we should meet at the first tee...again.  I'm real willing, how about you Dickie??