Two others are Clarkson University products 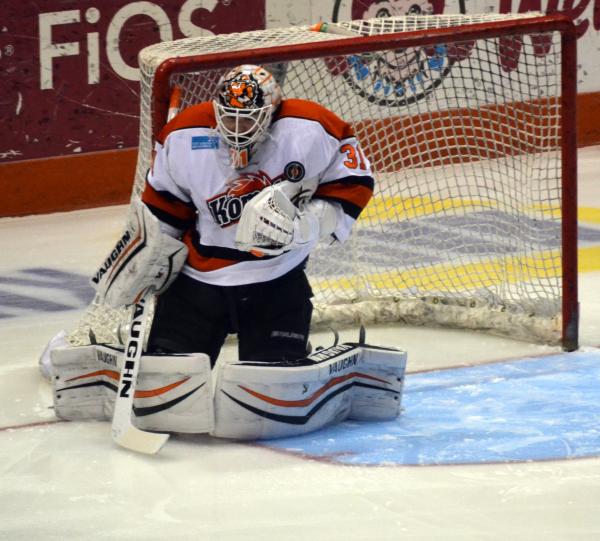 Nice to have Nagle back.

Boak, having 31 games in the AHL last season, seems to bring another nice player in for the "D".  Hard to judge Pawlick.  His stats in the SPHL look encouraging.  Hard to translate what those mean in the ECHL.  I'm sure Gary Graham got some great reports on him as he played the last two seasons in Pensacola.

Looking forward to what signings come next.  Hopefully more of last year's "D".

Things are starting to come together.

Friday is the "early bird" deadline.  With the signings so far and the affiliation announcement, it has been a very encouraging week.

Levi, Sol, Boak and Kucera are a great start in front of Nags. Like what Im seeing.

The way I'm hearing it, the Komets expect to have 27 players in their camp.  Twelve players are signed and they expect six from the San Antonio camp.  That leaves nine openings.

There are four players with "qualifying offers" not yet signed (or announced).  There has been one "veteran" signed.

Logic would dictate that one from San Antonio will be a goaltender.  So I'm thinking that every new signing from here on out will be an "impact" player of some sorts (whether on defense or offense).

Still only one veteran on the roster (and none of the four qualifying offer guys would count against the veteran rule).

To bad about goalie. .would like 2 have seen guggenberger. ..vets. .let's c. .prior names possible. .time will tell. ..

I know its early, but small up front (center/forwards)!  Like the Def, hope we can reel in Tam, Martin & or Daniels!

I'm with you, who/suz.  Would've loved to have seen Guggenberger here.

Sometimes I think Kalamazoo has stumbled upon the right idea.  That is, they have a great goaltender in Joel Martin who doesn't seem to be a threat to leave their roster because of his age.  It gives them some choices (especially if call-ups or injuries occur at that position).

Don't get me wrong.  I love the Nagle signing.  But he's not property of Colorado and can be called up by any AHL team.  If the Colorado property goaltender we receive is called up and Nagle has left, it puts the Komets in an awful position.  (In fact, that exact scenario happened last season).

But here's the deal with me.  I know the Franke's are on top of all this stuff...and they know who they've signed (just not announced).  Selfishly I hope that Faille, Szydlowski, Leach, Daniels and Martin are next in line.  The other thing that I always remind myself of is that on Opening Night, about 25% of the players won't be on the roster by the time the playoffs begin.

The other thing is that, right now, I'm a little more concerned with who the Reds are trading away.  I have more confidence with the Franke's and their roster decisions than I do with Walt Jockety (Reds GM) and Bob Castollini (Reds owner).

The Cubs have done a nice job.  Traded well, drafted well, signed some nice players who are young and talented.  Still, I always remind all my friends who love the Cubs, that the last time the Cubs won a World Series was four years BEFORE the Titanic sunk.

Heck, anybody can have a bad century!

Certainly would love 2 have Daniels 4 sure....

Going 2 Loveland and Rapid City next year..should be fun

Oh Alan..you lost me..Cubs..sorry spent 40 years there in and around Wrigley. .there management does not care if they win or lose. .only about the money..they are still losers..imo

On July 29th (last year), the Komets announced the signing of Shawn Szydlowski.

Will the Komets celebrate the anniversary by announcing his signing today or tomorrow?  I'm hoping so.  Also hoping that he has recovered from his surgery and will be full strength no matter where he may end up.

Alan, Shawn just got the ok to skate this week.

Chris Auger signs with Brampton.  just came across the wire. Chaulker has signed a good player and team player.

You suppose that means Fleming is next since they seem to be a package deal at this point?

Auger is a nice signing for Colin Chaulk and Brampton.  He gives them experience, scoring, and doesn't yet count against the "veteran"  limits.

Chaulk got Yannick Tifu signed also. Very good player at this level. Could be a much stronger team then last year. Trending that way.

Alan-  Syzd and Daniels return...also PJ Fenton signed..Seems like the Komets have thier top 5-6 forwards locked up already. This is gonna be a good season

Alan-  Syzd and Daniels return...also PJ Fenton signed..Seems like the Komets have thier top 5-6 forwards locked up already. This is gonna be a good season