Southorn turned down other offers to return

He wanted to come back to Fort Wayne 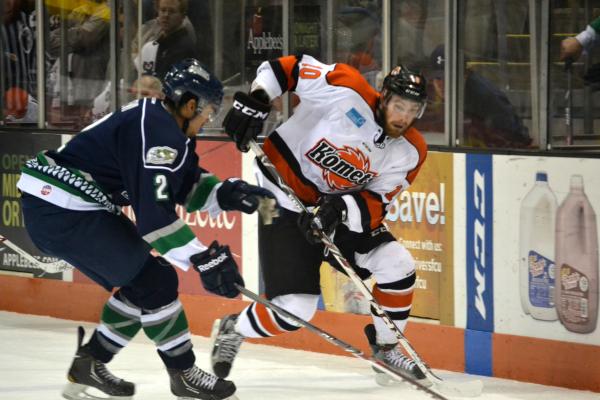 Lots of information in this article.

First, I'm very happy for Leach.  Signing a two-way is a big deal.  Even as I'm sorry to see him go, I wish him the best of luck.

With Leach gone it makes it even more important to get Martin ( and that terrific +/- of last season) under contract.  His signing would make this defense very formidable in many, many ways.  By the way, Martin's signing last season was announced on 9/12/14.

And again, as we sit here today, only one vet has been signed.  Not my worry, but I am fascinated that the K's are able to put this particular roster together ( with three vet slots left) and be able to stay under the cap.

Finally, and nothing to do with signings, but isn't it time for the premeire "AA" league to consider changing its name from, what a writer called, "a nonsensical acronym" to something else??

Disregard the +/- part of the above post.  Still want to see Martin here, but I typed in Leach's +/- instead of Martin's.

I'm very happy at the way the team is shaping up sofar. Southie is a very great asset to sign. If we get Martin, then I believe the K's will have one of the most formidible Bluelines in the ECHL. Speaking of Centermen, Forwards and Wingers; I think that Matt Crter would make a very good addition at Center! Just can't wait for the season to start!!!

Absolutely not the worst suggestion I've heard.  But since Klaus brought the subject up, how about "old friends" Nathan Condon or Thomas Frazee?

Or even Alex Belzile, Curtis Valk, or Kyle Bonis??  I believe that all five are listed as free agents and have not signed with anyone yet.  If Santa wanted to bring us a present early, Belzile, Valk, or Bonis would certainly do.

I know that the latest article stated Franke would like to add some size upfront, but boy, Valk would be fun to watch in a K's uniform.

Scott Fleming signed with Greenville.  It would have been nice to see him in a K's jersey again.

Scott Fleming signed with Greenville.  It would have been nice to see him in a K's jersey again.

Good question, who/suz.  Auger's girlfriend is here (maybe was here) and both Auger and Fleming sat a couple rows beneath me during a playoff game or two last season.

Sometimes things just don't work out (and just because they've been announced doesn't mean they haven't been signed for quite a while).  Until the K's announce who they may have put under contract its hard to figure stuff out.

Let's just keep getting good players under contract.  Hoping for Martin on D and then concentrate on some firepower up front.  Sixteen under contract.  Looking for six (which includes one goaltender) sent from San Antonio, leaves five yet to sign.  Still only one veteran.

By the way, and as before, I agree with you about Guggenberger.  For some reason I don't think we've heard the last about him.

Do we really want to go where we have been the past couple of years...smaller forwards?  Belzile might be interesting however....scoring and 113 PIM

I totally understand your point, who/suz.  But looking at the forwards I see (maybe) four "A" players (Ouellet, Sivak, Fenton, and Szydlowski), and one B+ player (Perlini, who I've liked since he came here from Indy).  I think the K's are a little short on scoring.  Of course there may be a couple young guys signed to the roster that would quell that fear.  But without  knowing who they've signed (but not announced), and who they may get sent to them from San Antonio, those three guys might be nice additions.  (Personally, I think Valk would fit right in).

I think Franke gave us all a hint in Blakes article.  "A couple of centers and more size upfront".  It kind of eliminates any of those three to an extent.

I told myself I wasn't going to think about the forwards until the defense was set.  So there I go again.  Get the All-star Martin signed and they've done about as much as they can do.  But there is still room and still three vet spots to fill.

While there is a pause on Komet news I wanted to take a moment to relay some thanks.

First, I can't think of any ECHL team that has better coverage.  The News-Sentinel with Blake Sebring ( I appreciate his work and time spent on hockey related stories and Komet news that includes a lot more than just the game results.  Lots of times we clash on things but that doesn't mean I don't respect his in-depth articles).  Also to the Journal-Gazette.  It's very unusual for any city to have two newspapers, let alone have two that dedicate so much to to a hockey team.  We're lucky.

Also to MyTV.  The number of road games televised certainly enhanced my enjoyment of the Komet season.

To the Franke family and all those that work behind the scenes to make my STH experience so enjoyable.  The front office is tasked with acquiring the players and Tammy and Jody are always the smiling faces that greet and take care of the customers.

To the Coliseum, staff, and management for taking care of a bulding and property so well that it has become taken for granted.  (Ask the people in Flint Michigan about their experiences).

So, thanks to all.