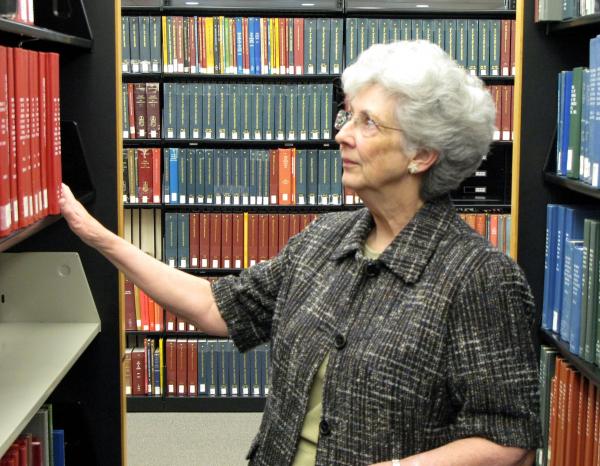 Margaret Hobson of Spencerville has spent 20 years researching the history of the men — most from northeast Indiana — who served in the 44th Indiana Regiment in the Civil War. Hobson, who found much of her information at the Allen County Public Library's Genealogy Department, hopes to publish the story of the 44th as a book or series of books.
By Kevin Kilbane

Editor's note: To commemorate the 150th anniversary of the Civil War, The News-Sentinel is providing a retrospective on the role Allen County residents played in the war effort.

Margaret Hobson started off trying to gather information on a distant relative who served on the Union side during the Civil War.

The Spencerville woman ended up “adopting” the entire unit, compiling information on every man who served in the 44th Indiana Regiment. She eventually hopes to share what she has learned in one or more books.

“I just feel the men want their story to be told,” she said.

Americans will spend much of this year commemorating the 150th anniversary of the Civil War. Fought from 1861 to 1865, it pitted the North against the South over questions of preserving slavery and the country as a union of states.

Hobson, who taught math in the Fort Wayne Community Schools district for 20 years before retiring, started researching her family's genealogy about 40 years ago. She began working on her mother's side of the family about 30 years ago. That's when she discovered ancestor Lewis W. Griffith, a member of the 44th Indiana who enlisted in August 1861 as a private and was discharged at the end of the war in September 1865 as a captain.

She found his story so interesting, she decided to gather information on the more than 2,000 men who served with him in the unit during the war. Most of the men came from northeast Indiana, including the regiment's first commanding officer, Col. Hugh B. Reed of Fort Wayne.

In her quest, Hobson has spent hours at the downtown Allen County Public Library, where the Genealogy Department has been a treasure trove of facts and details. Her search also has taken her to the Indiana State Archive, Indiana State Library and Indiana Historical Society, all in Indianapolis, as well as to the National Archives in Washington, D.C.

Formatted for book-size pages on her computer, the men's bios now fill more than 350 pages, she said. Currently, she's not sure if she will publish the bios as part of one or more books, or just put all the information online for people to use.

“I never was interested in making money on this anyway,” Hobson said.

Hobson's findings about 44th Indiana offer an intriguing view into the war at the personal level.

When war was declared after the Confederate attack April 12, 1861, on Fort Sumter, in South Carolina, many men in the Fort Wayne area rushed to enlist and get in on what some thought would be a brief and glorious march to victory.

To enlist, men were supposed to be ages 18-45. However, Hobson found many accounts of older soldiers using shoe polish to hide gray hair on their heads and in beards. Teens reported writing the number “18” on a slip of paper and tucking it under their foot in a shoe so they could swear they were “over 18” when asked about their age.

Many of the soldiers in the 44th Indiana were age 18, Hobson said. But the unit had several 14-year-olds, including a drummer standing only 4 feet, 1 3/4 inches tall. The oldest regiment member was age 65.

The 44th Indiana gathered to start active military service Nov. 22, 1861, in Fort Wayne, Hobson said. From 1862 to 1863, they fought in major battles in Tennessee at Fort Donelson, Shiloh, Stones River and Chickamauga, the last of which was on the Tennessee-Georgia border near Chattanooga.

From June to December 1862, the 44th marched more than 800 miles in pursuit of the army of Confederate Gen. Braxton Bragg, trudging east from Corinth, Miss., to Bridgeport, Ala., then north to Nashville and Louisville, and south about 60 miles to Perryville, Ky.

“It was just amazing that they survived it,” Hobson said.

When the 44th arrived near Perryville, they could hear other Union Army units fighting Bragg's troops, but their unit was not called into battle, she said. After pursuing Bragg that far, the men were so disappointed they couldn't fight that about 20 deserted the regiment.

Reality hit home in other ways, too.

Of the 952 enlisted men who made up the 44th at the start of the war, four died by accident, 159 died from disease and 64 died from war wounds, Hobson said.

Overall, 18 percent of the soldiers in the 44th died, she said, a rate higher than the 14 percent average for all Indiana units. She attributes the higher casualties to the battles the 44th fought and its long marches.

The soldiers' diaries talk about bathing once a month and continual problems with body lice, she said. They didn't have the medicines we do today to heal some of the wounds and diseases. Back then, some people still used bloodletting as a cure, she added.

Some men in the 44th also wrote about the shock of witnessing a slave auction in Henderson, Ky., Hobson said.

The 44th Indiana finished up the war doing guard duty around Chattanooga, she said. They were released from service on Sept. 15, 1865.

Despite getting little credit for their war accomplishments, the men of the 44th Indiana had a major impact early in the war, Hobson said.

During the battle at Fort Donelson, which is near Dover in northwest Tennessee, the 44th twice stopped Confederate troops from breaking through the Union lines and regrouping, she said. Had those Confederate troops pushed through and regrouped, the Rebels may have mounted a stronger fight at the Battle of Shiloh — a battle they eventually withdrew from after both sides suffered heavy casualties.

“The 44th really were heroes,” she said.

And what of her ancestor, Lewis W. Griffith — the one who launched her on this military campaign?

A farmer near Hamilton in Steuben County, Griffith married just days after he enlisted, Hobson learned. Two of his brothers also went to war, Benjamin serving with the 152nd Indiana and Leamon with the 74th Indiana. Leamon died as a result of being shot in the right knee during the battle at Chickamauga.

Lewis was age 23 when he began combat duty with the 44th. During his four years with unit, he rose from private to captain. He suffered a wound to the face at Shiloh and to the right hand at Chickamauga.

He re-enlisted Jan. 1, 1864, but lost four months pay after being found guilty at a court martial in August 1864 of being “partially intoxicated” and “guilty of conduct prejudicial to good order and military discipline.”

After the war ended, Lewis Griffith returned to Hamilton, Hobson said, where he died in January 1918 at age 78.

“I was/am proud of his service and feel a large debt of gratitude for what the soldiers accomplished,” she said. “They suffered so much in order that the union was preserved. We take it for granted now.”

Facts on the 44th

Being a former math teacher, Margaret Hobson had the urge to put many of her findings about the 44th Indiana Regiment into a neatly organized database. Sorting the data, she said, has revealed interesting facts about the men:

♦The average soldier in the regiment served 681 days before being discharged for disease. He stood 5 feet, 8 inches tall, was nearly 25 years old, was born in Ohio and was a single farmer living in Steuben County.

♦For every soldier in the 44th who died from wounds, two died from illness.

♦At least 95 men signed their name with an “X” because they were unable to read and write. But a higher percentage of those soldiers survived the war and didn't desert the unit compared with rates for more-educated regiment members.

♦Two men, both age 45, were the oldest to enlist in the regiment and muster out with it at the end of the war.

If you have photos of a Civil War ancestor who served in the 44th Indiana Regiment and would like it included in Margaret Hobson's book about the regiment, contact her atCW44thIndiana@aol.com.

♦To find basic facts about a relative who served in the Union or Confederate military during the Civil War, go to the Civil War Soldiers & Sailors System database atwww.itd.nps.gov/cwss.

The 44th Indiana Regiment had five commanders during the Civil War, researcher Margaret Hobson said. She discovered the stories of those men all end sadly:

* Col. Hugh B. Reed of Fort Wayne was the first commander. A wholesale druggist by profession, he was loved by his men. After leading them successfully at the battles at Fort Donelson and Shiloh, he was nominated to be named a brigadier general. He left on a two-day leave pass on Aug. 6, 1862, and, thinking a prior request to return home to recruit more soldiers would be honored, didn't return to the unit until Sept. 3. Considered absent without leave, he was forced to resign his command. He returned to Fort Wayne and resumed his family and business life.
“He was broken, though,” Hobson said. “He never did anything after the war. He spent a lot of time sitting in his chair.” He is buried in Lindenwood Cemetery.

* Col. William C. Williams was a doctor practicing at Wolf Lake in Noble County when he enlisted and was named Capt. of Company G of the 44th. He led his company in the battle of Shiloh, and led the regiment at Stones River until he was captured and sent to Libby Prison in Virginia. After several months, he was freed during a prisoner exchange and rejoined the unit before resigning in July 1863. Later, it became known he had secretly married the daughter of a former attorney general in 1855 in Philadelphia, and he had left her immediately and changed his name to hide from her.

* Lt. Col. Simeon C. Aldrich, a tailor living in Angola, was age 45 when he took command of the 44th. He led the regiment in the battle at Stones River after Williams was captured. He also led them at Chickamauga, where he and the regiment were commended for deciding on their own to rush in and reinforce a section of the Union line under Confederate attack.
Aldrich, however, was a disciplinarian and was disliked by his men. He commanded the regiment until early August 1864, when he was given a leave of absence for poor health. He made it home, but died a few days later at age 47.

* Lt. Col. Joseph C. Hodges led the regiment only briefly. Shortly after being named commanding officer following Aldrich's death, he fell out of a railroad car near Tullahoma, Tenn., and was run over. He died during surgery to save his life.

* Col. James F. Curtiss was one of three officers who served with the 44th throughout the entire war. Born in Kingsville, Ohio, he moved to Elkhart at age 16.. He returned to Elkhart after the war. He later moved his family to Petoskey, Mich., after which he soon became ill and died suddenly in September 1875 at age 37.