Faces of the GOP: Oscar Underwood 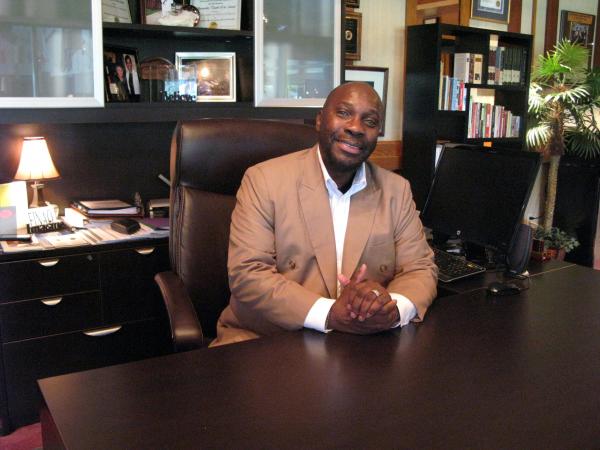 Dr. Oscar Underwood is a Fort Wayne pastor, educator and community activist. He also has a long history of involvement in the Allen County Republican Party and was named the first African-American platform chair for the party's convention in the early 1990s. (Photo by Jaclyn Goldsborough of The News-Sentinel)

To recognize diversity among the Allen County delegation, The News-Sentinel is profiling three Republican delegates chosen by voters to represent constituents at the 2014 Indiana Republican State Convention held in Fort Wayne.

Oscar Underwood is an influential man in Allen County on many levels. He's a pastor at the Destiny Dome Embassy on Harris and Goshen roads. He's an educator and founder of Cornerstone Christian College Preparatory Day and High School. He's an author, speaker and community activist. He's also an active member of the Allen County Republican Party and will again serve as county delegate during the Indiana Republican Party State Convention on Friday and Saturday at the Grand Wayne Center in downtown Fort Wayne. Fort Wayne also served as host of the Democratic state convention in 2012.

Underwood is no stranger to political conventions. In the early '90s, he was named the first African-American state platform chair for the convention. His long history in the GOP leads him to believe that the party is in a transition period, and that's a good thing.

“Some feel that our party is no longer able to be viable in our present day scenario. We need to once again, as committed Republicans, revisit that. Like so many other Republicans, I still believe that our greatest days are ahead of us, but we have to seize this moment and really show the courage to be true to our core values and our message. I believe like other Republicans such as Colin Powell, George Bush Sr. and Ronald Reagan believed,” he said.

Underwood said Allen County and Indiana Republicans can serve as examples to the nation of the strength and power of the Grand Old Party.

“The nation is looking at Indiana and how fiscally effective we have been as well as the overall vitality and health of our party. This is a key moment. We can speak from Indiana to the heart of the party and the nation, and we can say, 'The party of Abraham Lincoln is still alive and this is us,' ” he said.

And national eyes are on Indiana as the state discusses the topic of gay marriage, which was added to the 2014 convention platform last minute and will be voted upon by the nearly 2,000 delegates attending, including Underwood.

“I think the party must acknowledge the fact that, like any family, we have not only the right to think differently about some things that we may differ on, but we can agree on the major things that cause us to be Republicans. There's a need for dialogue, and for that to be effective, diplomacy must be present. Just because we differ does not mean we have to be mean spirited or angry with one another. We can be true to our beliefs and yet understand that part of the inherent rights that we have in our democracy is to be able to have the personal liberty to express how we feel. I think that's healthy,” he said.

Steve Shine, Allen County Republican Party chairman, echoed Underwood saying that's the point of the convention, to bring dedicated party representatives to the same table to hash out what's important. No matter the outcome, the process is just as significant.

“It's important, at a convention, to bring together all viewpoints, and no viewpoints should be discouraged. It's important that the issue itself has a full vetting and full discussion among the delegates. There are people in the party that have varying views. I give the party credit of not being afraid, regardless of the position, to allow their delegates and members of the party to express themselves as freely as they wish. The outcome is what it is, but the process is important,” he said.

When Underwood and thousands of other Republicans vote on the platform and candidates this weekend, he said they come bearing their constituents, experiences and values in mind.

“When I go to the convention, I don't go alone. Each of the delegates bring with them their life experiences. All of my mentors, my teachers, my professors, my parents, my ancestor, my students, they all stand there with me. When we vote, we hear their voices,” he said.