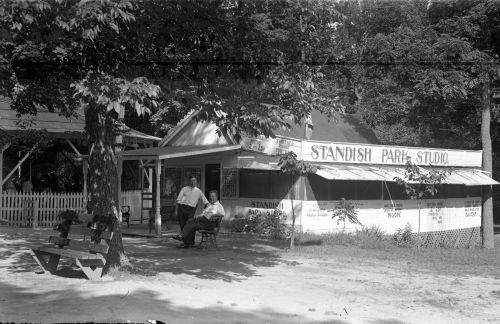 This photo shows photographer Norman P. Standish's photo studio at Robison Park, a popular
amusement park north of Fort Wayne in the early 1900s. Standish is seated on the bench.
The identify of the other man is not known. (News-Sentinel file photo)

By Kevin Kilbane of The News-Sentinel

Many of the photos you see in The News-Sentinel's coverage of the 100th anniversary of the Flood of 1913 were snapped by one man — Norman P. Standish.

Here is a little about him, drawn largely from 1976 News-Sentinel stories about the man and his work, and from Craig Berndt, development services program manager for City Utilities, who has a collection of Standish photos:

Born in 1877 in Jackson, Mich., Standish already had established himself as a photographer when he met his future wife, Lovella, while taking a photo in 1908 of her and the rest of the nursing school graduating class at Jackson City Hospital.

The couple soon married, and not long afterward they moved to Fort Wayne.

Standish, commonly known as “N.P.,” reportedly opened a photo studio in downtown Fort Wayne in 1909, but sources differ on the location. One had the studio at 115 1/2 W. Main St., while another placed it at 113 W. Wayne St.

At the same time, Standish also opened and operated a photo studio near the carousel at Robison Park, a popular amusement park a short trolley car ride north of Fort Wayne.

Along with taking portraits of people — both serious and posing on props, such as a fake early airplane and a smiling crescent moon — Standish took photos of important buildings and events like the Flood of 1913.

He also had the ability to turn his photos into postcards, which people could buy and send to family and friends.

In 1913, Standish reportedly was so overwhelmed by demand for his picture postcards of the flood that he asked his stepson, Fred, who lived in Ohio, to come to Fort Wayne to help him fill postcard orders.

But the business boom soon receded, just as the waters of the Flood of 1913 gradually drained away from the city.

Over the next several years, more photographers had opened shop in Fort Wayne, creating more competition for business. Robison Park closed in 1919, eliminating a significant source of Standish's income.

In the mid-1920s, the Standishes moved out of their home at 1052 Delaware Ave. and returned to Jackson, Mich., where he resumed his photography business. He died there at age 61 on Sept. 22, 1938, according to an archived 1976 letter from the Jackson Public Library.

The couple left Fort Wayne a gift, however, if only by accident.

In 1975, the then-owner of the Standishes' former home on Delaware Avenue found a well-preserved collection of glass-plate photo negatives in the attic.

The discovery not only gave the community images — some quite rare — of historic buildings and events, such as the Flood of 1913. It also gave us the chance once again to see the city through Standish's lens.