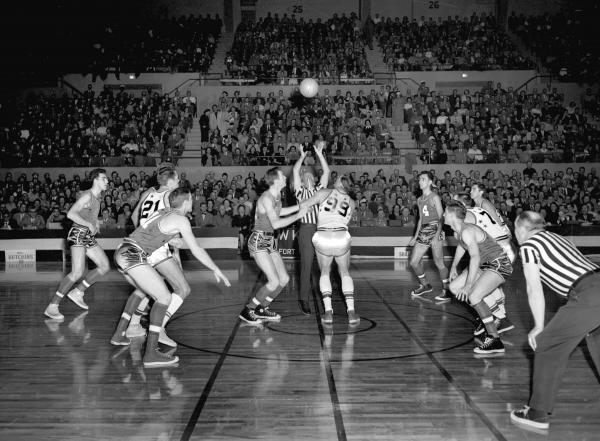 By Blake Sebring of The News-Sentinel

Editor's Note: This is the first in a series of excepts from the book ``Fort Wayne Sports History.

A record crowd of 10,340 showed up to see the best basketball players in the world put on a show. The first two all-star games had been played in Boston, drawing a crowd of 10,094 the year before.

With a population of approximately 135,000 at the time, Fort Wayne was the smallest city in the league. Pistons owner Fred Zollner paid about $18,000 for a chance to show off the new Memorial Coliseum.

The game was also historic because Don Barksdale became the first African American to play in an NBA All-Star Game.

Barksdale was used to breaking barriers, as he was the first consensus African-American All-America player while at UCLA and later became the first African American to play on the United States Olympic basketball team, earning a gold medal in 1948.

At the time, Barksdale was one of four African-American players in the NBA along with Chuck Cooper, Nat ``Sweetwater'' Clifton and Earl Lloyd. Ironically, Lloyd became the first African American to play in an NBA game on Oct. 31, 1950, and during that same week Cooper and Clifton both made their NBA debuts on different nights in Fort Wayne.

Barksdale scored one point, pulled down three rebounds and passed two assists in the all-star game.

The West won 79-75 as Mikan was named the Most Valuable Player after scoring 22 points and grabbing 16 rebounds. Phillip set up Mikkelson on the two baskets that decided the game.