It's come to this

The Pulitzer was already beginning to seem a liitle enervated and effete to me, with the likes of Tom Friedman and Eugene Robinson winning for columns. Now this awful, awful, AWFUL cartoon has won. And check out more of his work here -- all just as terrible. They're unfunny, poorly drawn label cartoons that would have seemed trite even in the 1930s. What the hell were they thinking? 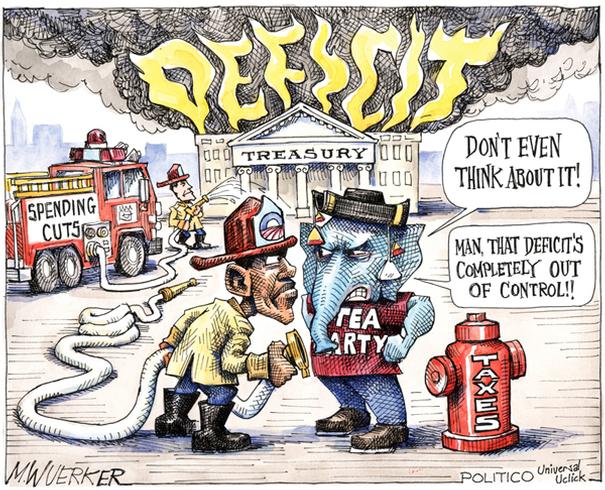 I can't read what's in the conversation bubbles because there's some sort of stocks summary overprinting it. Probably something wrong with my ancient steam-powered computer.

This cartoon makes sense if it is understood that back behind the building, unseen by us, are Democrat and Rino children playing with matches.

I think "political cartoon" and "funny" isn't a word that immediately coming to mind.  Oh, Mike Peters is, but Herblock never was, and the best Bill Mauldin ever did was to have a pair of GIs in the tall weeds of a swamp, with Willie saying "Joe, yestiddy ya saved my life, an' I swore I'd pay ya back. Here's my last pair o' dry socks."

Matt Wuerker did a cartoon with a pollster asking, "OK - next all those who think we're involved in too many wars, raise your hand."  The donkey is holding up his hand, as is the elephant, the black man, and the hippie chick - and finally, on the end, the soldier in full battle gear.  They aren't ALL as terrible as you make out.

I'm still wondering why political cartoons are even still made.

Two that stand out in my mind are:

2 - President Clinton staring down the stairs at a dark and scary basement with a caption that I believe said foreign policy.