You have to get used to a certain amount of posturing in this business, just accept that a lot of the people you're talking to are saying things just for effect. But honestly, the posturing in the last week over Indiana's Religious Freedom Restoraion Act has become insufferable.

Oh, look, Connecticut is banning state-funded travel to Indiana over the RFRA, but, oops, Connecticut has an RFRA, too. Chicago Mayor Rahm Immanuel is inviting Hoosier firms upset over the RFRA to relocate, but, hang on there, Illinois has an RFRA as well. The NCAA is darned upset it has to have the Final Four in that bigoted Indianapolis as unbeaten Kentucky tries ... well, gosh darn it, Kentucky has an RFRA! Hillary Clinton tsk tsks that mean old Mike Pence shouldn't discriminated against people because of who they love. Oh, say, didn't her hsuband sign the federal RFRA into law?

I could go on and on, but you get the point. It's obvious none of these posturers have actually read the law or thought about the 20-year history of such laws. But in an important way, what's actually happened doesn't matter, and what the las says is mostly irrelevant -- it's all about the signaling. Reason's Scott Shackford:

As we can see from the graph, many of these RFRAs passed when gay marriage recognition was an unpopular concept, polling below 40 percent. Now that gay marriage is increasingly popular, this RFRA has become a signals contest in the culture war. Obviously nobody is obligated to engage in any form of discrimination in Indiana, and I would wager that 99.9 percent of Indiana's businesses will not turn away a single person for being gay. But it's all about positioning yourself within this moment we're having. Pence has to pretend the law doesn't protect bigotry against gays because that doesn't poll so well anymore, but can't seem to argue that protecting civil liberties often requires defending bigots or it's not really a civil liberty. The CEO of Apple has to write a big commentary about how discrimination is wrong and bad, and how you should also know that Apple, the company that he works for that sells many, many expensive things to customers, would never do such a thing. The band Wilco just tweeted they were canceling their show in Indianapolis.

Wilco's "signaling" here also stands in as a weird sort of collective punishment. What does anybody who is likely to attend a Wilco concert or any of the businesses with which they are likely to interface have to do with this law? Nothing.

Massive gaming convention Gen Con had initially made a big deal about possibly moving out of state in response to passage of the RFRA, to "deny" the state millions in revenue. But that's confusing the government of the state with the citizens of the state. It's businesses in Indianapolis who actually rake in money from the convention. Gen Con has backed off for now after actually talking to the businesses that they deal with, who of course have absolutely no interest in discriminating against any gay Gen Con attendees.

But they signaled loud and clear. It doesn't actually matter that the RFRA won't really lead to some sort of new dark ages against the gays because culture simply has no interest in going there. The important thing is that people position themselves properly to be seen as good people by their peers.

And the mother-of-all posturing, er, signaling awards goes to, The Indianapolis Star, which had a dramatically printed editorial that took up the whole front page! I've been in this business a long time, and I know you don't do a front-page editorial just because you think there's a big problem to solve or an urgent issue to address. You do it, too, because you want to make a statement about yourself, be seen in a certain way. The Star has just made the statement, in the most preening way possible, "Look at us, we're the good guys, too!" Congratulations, Star editors. In a week full of horse's asses, you are the biggest horse's asses of all. 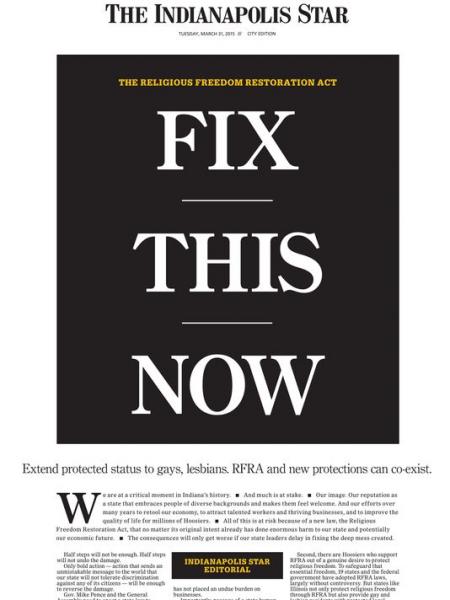 Posted in: Hoosier lore, The law and the jungle, Politics and other nightmares

When you read and compare those tedious state statutes , you will find that the Indiana statute has two features the federal RFRA—and most state RFRAs—do not.

First, the Indiana law explicitly allows any for-profit business to assert a right to “the free exercise of religion.” The federal RFRA doesn’t contain such language, and neither does any of the state RFRAs except South Carolina’s; in fact, Louisiana and Pennsylvania, explicitly exclude for-profit businesses from the protection of their RFRAs.

The new Indiana statute also contains this odd language: “A person whose exercise of religion has been substantially burdened, or is likely to be substantially burdened, by a violation of this chapter may assert the violation or impending violation as a claim or defense in a judicial or administrative proceeding, regardless of whether the state or any other governmental entity is a party to the proceeding.” (My italics.) Neither the federal RFRA, nor 18 of the 19 state statutes cited by the Post, says anything like this; only the Texas RFRA, passed in 1999, contains similar language.

What these words mean is, first, that the Indiana statute explicitly recognizes that a for-profit corporation has "free exercise" rights matching those of individuals or churches. A lot of legal thinkers thought that idea was outlandish until last year’s Hobby Lobby decision , in which the Court’s five conservatives interpreted the federal RFRA to give some corporate employers a religious veto over their employees’ statutory right to contraceptive coverage.

Second, the Indiana statute explicitly makes a business’s "free exercise”"right a defense against a private lawsuit by another person, rather than simply against actions brought by government. Why does this matter? Well, there’s a lot of evidence that the new wave of "religious freedom" legislation was impelled, at least in part, by a panic over a New Mexico state-court decision. In that case, a same-sex couple sued a professional photography studio that refused to photograph the couple’s wedding. New Mexico law bars discrimination in "public accommodations" on the basis of sexual orientation. The studio said that New Mexico’s RFRA nonetheless barred the suit; but the state’s Supreme Court held that the RFRA did not apply "because the government is not a party."

Remarkably enough, soon after, language found its way into the Indiana statute to make sure that no Indiana court could ever make a similar decision.  Democrats also offered the Republican legislative majority a chance to amend the new act to say that it did not permit businesses to discriminate; they voted that amendment down.

Being required to serve those we dislike is a painful price to pay for the privilege of running a business; but the pain exclusion inflicts on its victims is far worse.

Of all the state “religious freedom”, this new statute hints most strongly that it is there to be used as a means of excluding gays and same-sex couples from accessing employment, housing, and public accommodations on the same terms as other people. True, there is no actual language that says, All businesses wishing to discriminate in employment, housing, and public accommodations on the basis of sexual orientation, please check this “religious objection” box. But, as Henry David Thoreau once wrote, “Some circumstantial evidence is very strong, as when you find a trout in the milk.”

The statute shows every sign of having been carefully designed to put new obstacles in the path of equality; and it has been publicly sold with deceptive claims that it is “nothing new.”

Gov. Mike Pence ran to the loving arms of Faux "news" this Tuesday to do some damage control -- following his career ending interview on "This Week" -- where he was lobbed softballs and allowed to play the "I have one black friend" card when pretending his state's newly passed Religious Freedom Restoration Act isn't intended to allow businesses discriminate.

“Five years ago my wife and my family walked the Edmund Pettus Bridge with John Lewis when I co-chaired the pilgramage to mark the 45th anniversary of Bloody Sunday,” Pence said. “I abhor discrimination. If I was in a restaurant and saw a business owner deny services to someone because they were gay, I wouldn’t eat there anymore. Frankly, that’s how most Hoosiers are.”

“It’s important to me in this process — and we’ll do it through legislation — that people know that Indiana is standing here for religious liberty,” he added. “But there was never any intention in this law to create a license to discriminate.” Really Gov Pence?  Then why did you say specific protections for gays are "not on my agenda"?

Of course no one on Fox asked Pence about the people around him when he signed the bill.They include the state’s three most prominent lobbyists on conservative social issues: Micah Clark, the Indiana Family Institute’s Curt Smith, and Advance America’s Eric Miller.

Those three, with their connections to a vast network of conservative churches, led a failed effort last year to ban same-sex marriage in Indiana’s constitution. The governor has tried to distance the religious freedom legislation from that issue.   They were too busy helping him play the poor oppressed picked on Christian card. He's a victim being picked on by those meanies in the "liberal media" don't ya' know.

Maybe we could carry on with this : Mandatory church attendance.

An Arizona state senator thinks it is a good idea for the American people.

State Sen. Sylvia Allen, R-Snowflake, brought it up during a committee meeting Tuesday while lawmakers were debating a gun bill concerning concealed weapons permits, not religion.

Allen explained that without a "moral rebirth" in the country, more people may feel the need to carry a weapon.

"I believe what's happening to our country is that there's a moral erosion of the soul of America," she said.

"It's the soul that is corrupt. How we get back to a moral rebirth I don't know. Since we are slowly eroding religion at every opportunity that we have. Probably we should be debating a bill requiring every American to attend a church of their choice on Sunday to see if we can get back to having a moral rebirth," she told the committee.