Enough with the fast-food experiments already! I'm as adventurous as the next guy, and some of the innovation efforts have hit the mark. The Stand, out on Bluffton Road, for example, has something called the Waynedale Dog, which is basically a chili dog with cole slaw on top. And whoever at Taco Bell who thought up the taco with the Doritos crust is a genius. 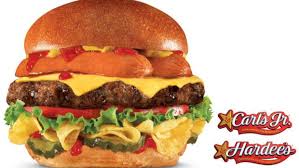 But, for God's sake, stop putting hot dogs in everything. Yes, I'm talking to you, Hardee's. Your Thickburger is one of my favorites. But your new version of it, a thick hamburger topped with a split hot dog and crushed potato chips, is a monstrosity.

And I'm talking to you, Pizza Hut. A pepperoni pizza ringed with hot dog bites? Yeech.

Is this marvel of modern food-engineering, ultimately, even a pizza? Can this latest brainchild of the international conglomerate that is Yum! Foods—an Italian-German fusion dish that puts the “frank” in “Frankenstein's monster”—really count as A Pizza at all? At what point does a particular food product veer so dramatically from its historic origins and its Platonic form that it requires a new category altogether?

Of course, there will always be people ready to try something new, no matter how much of an abomination it is: 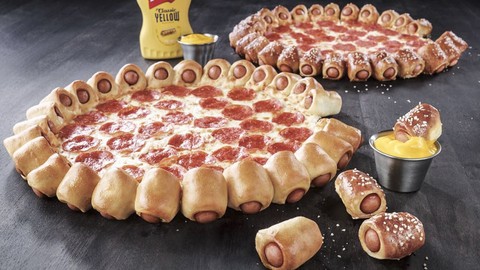 What I like about this is that it’s not so much a food experiment as an experiment in gluttony. They’re not mixing flavors. There’s no mystery what this tastes like. All they’re doing is stitching some pigs in a blanket to a pepperoni pizza by a strip of dough, like the band of skin that connects Siamese twins.

And the best part is, it represents Pizza Hut dumping its lame new strategy of pandering to younger diners who supposedly want silly “artisanal” crap with exotic flavors. No one with any pizza options at all goes to a chain like the Hut for something different. You go there because you want something that’s not different. It’s cheap, it’s fast, it’s filling, it’s familiar — precisely what this new monstrosity is.

Oh, please. I don't mind dissing the "arisanal crap" crowd, but not at the cost of creating a gastronomical abomination. I've long thought of pizza as a magic food -- you can put anything on it and it will tasste good. And hot dogs have always been one of my favorites -- preferably with chili, but I ain't picky. If somebody told me a restaurant would find a way to ruin two of my favorite foods at the same time, I wouldn't have believed it. But one did.

Posted in: Food and Drink