Some chicken**** busybodies in Liberty, Ind., have complained about a perfectly ordinary 28-foot-tall rooster sign for a restaurant, so now there'll be a hearing on whether a zoning variance should be granted allowing the sign to stay: 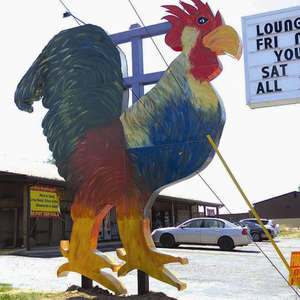 But Jeff Mathews, the county planning director, said he has received about a dozen complaints about the rooster. He said the 16-foot-wide sign is closer to the street than allowed under the zoning rules even though it doesn't obstruct the view of drivers.

"This is one of those things where the rules are kind of in the way," Matthews told the Connersville News-Examiner. "I don't run around the county looking for huge chickens. It's an unfortunate thing."

Mathews wouldn't say who complained about the rooster, but some customers of the restaurant known for its fried chicken said they believed it should be allowed to stay.

"Some people think it's an eyesore," customer George Himes said. "I think it's kind of neat."

It's good to hear that the county planner doesn't "run around the county looking for huge chickens." At one time, we probably could have taken that for granted, but these days you never know.

I guess I fall into the "kind of neat" category. I like bold and/or goofy roadside attractions, you know, like the Big Boys in front of the restaurants or the Touchdown Jesus statue in Monroe, Ohio, before it burned down or the world's largest roadrunner in Stockton, Texas.

In might have something to do with where I grew up. Hazard, the county seat of Perry County, was just a couple of miles from the Kentucky hollow I lived in, so I saw the Mother Goose building there so often it stopped seeming unusual. Doesn't every community deserve its own fowl building? 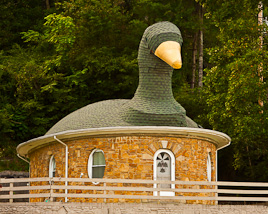 Posted in: All about me, Hoosier lore, Politics and other nightmares