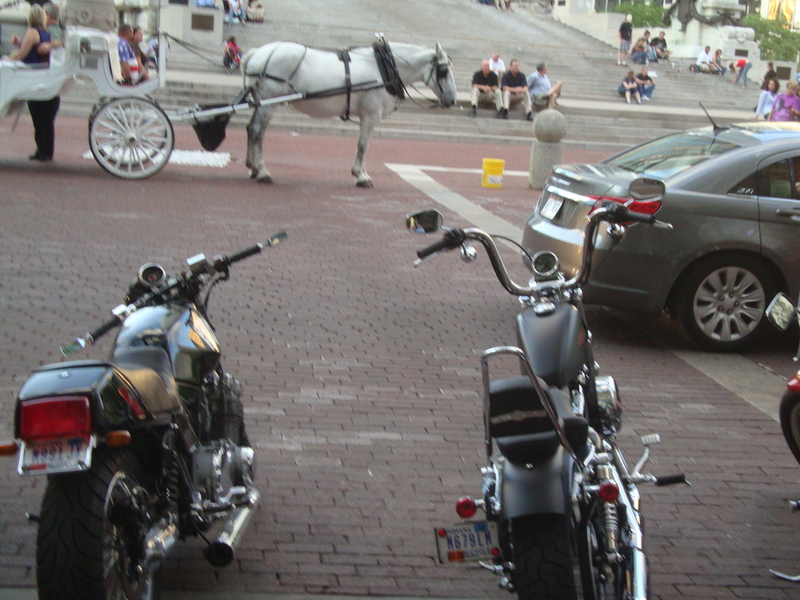 I snapped this photo at Monument Circle in Indy because I thought the bikes and the horse & carriage made a nice contrast. I and my sister and a friend of hers have made a couple of trips to the circle (and, living there, they've been more often), which is something Fort Wayne doesn't have: a downtown attraction that's a magnet for people all over the city. It's the place in Indy to see and be seen, and, as they used to say about Paris street cafes, you don't have to hang around very long to see just about every type of humanity there is.

A favorite hangout spot is in front of the South Bend Chocolate Co., which for some reason is where the bikers like to congregate, lining their bikes up at the curb and shooting the breeze with anybody who comes by. They have the stereotypical biker look -- jeans and scruffy boots, leather and either long hair or no hair, lots of tats. But they don't hassle anybody and nobody hassles them. Occasionally you see one with a sidearm (most people don't realize that Indiana law permits "carry" but does not specify that it has to be concealed), and my reaction is usually one of well-being: If a nut shows up with an automatic and evil in his heart, I'm glad somebody is packing who might get between me and him.

Posted in: All about me, Hoosier lore

As a longtime motorcycle buff, I can tell you the two motorcycles are nearly as different from each other as either is from the horse. You've got a Japanese crotch-rocket based cafe racer on the left that will probably do a 10-second quarter mile and a Harley-based chopper on the right which will give you a laid-back perch for miles, as long as you're not in a hurry. Neither bike is "better," but the philosophies couldn't be more different. My bad back rules out the painful crouch on the cafe racer, but my aesthetic sensibilities rule out the chopper. Why doesn't anybody make a standard motorcycle anymore? I guess I'm getting old. Hey you kids! Get off my lawn!