I haven't said much about President Obama's recent appointments that others on the right have been having fits about, because, well, the president gets to pick. That's the deal. I agree with all those critics that these appointees will make some very boneheaded policy moves, but they're the president's policies. Whoever he appoints -- these people or someone else -- will carry out those policies, so I don't see that there's much to gain from a big fight over them.

But I do feel compelled to note the awful, terrible signature of Jack Lew, because if he's approved as Treasury secretary, that signature may start gracing our dollar bills. It has been described as looking like "a Slinky that has lost its spring" and "Sally Brown's hair in Peanuts." Here, from New York magazine is what a Lew-signed bill would look like. 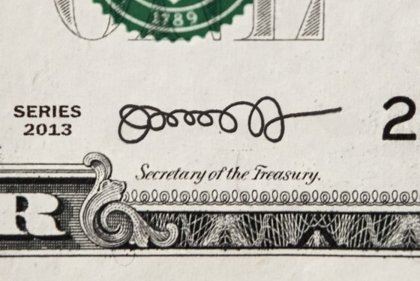 Be pretty embarrassing, huh? That's not just a bad signature. It's a deliberate effort to be eccentric. My brother, Larry, is that way. He signs his name in a scrunched-up little mass that looks liked a squashed hieroglyphic symbol, and I think he does it just to annoy people. It makes me feel better about merely having bad handwriting that makes it a little hard to read my signature.