Any of you trembling in fear because of the Big Bad Sequester? For a little perspective, consider this chart: 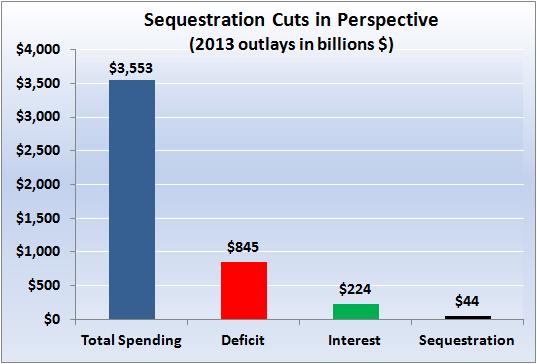 As the CBO report shows, only $44 billion of the $85 billion sequester will be cuts in actual federal outlays for 2013. That number pales in comparison with the projected level of spending that year, the $845 billion deficit, and the $224 billion on interest payments.

Meanwhile, here's the misleading question of the day:

Libertarians want to reduce the size of government. Conservatives do, too, sort of. I haven't seen much evidence that Republicans care that much about it. They just want to beat Democrats more than Democrats beat them.

Interesting article in  WSJ written by Phil Gramm. After sequester, because of the rules of  continuing resolultion.the government will be able spend $15 billion more than last year and 30 percent more than it spent in 2007.  When the budget returns to regular order, other cuts will be possible.

The administrationhas identified $2.7 billion in fraud and mismanagement in the Food Stamp Program and $62 billion in annual waste in Medicare and Medicaid. Might be a good place to start cutting.

How about *prosecuting* fraud no matter where it's found, and firing those with bad management skills?

Yes, i know the reasons FOR civil service, but that's turned out to be far more a disaster than unized employees.  Politicians still hire pe0ple to return favors, but when the p0litician's term ends, those people stay on and the next one elected hires still more, leadinfg to government growth. Decades ago, Chicago pols had a reputation for graft and mepotism, but by gosh, the aldermen made sure the potholes were fixed, the poor widow was fed, and the guy without a job was able to earn a paycheck, even though small, until things opened up, because that's how aldermen won re-election.  If people are responsible to someone who is standing for re-election, that's better than civil servants who cannot be fired.

Of course, I haven't noticed many banksters being prosecuted, and it's been five years or more.  If you don't do anything about fraud and abuse, why would you expect it to be reduced.  Simply cutting the overall budget doesn't work.  Jimmy Carter promoted "zero based budgeting" but there's thr problem of the Admiral's yacht, which always seemed to be included in the budget, no matter how much it was cut.