Today's "Don't you want to just smack him?" nomineee: 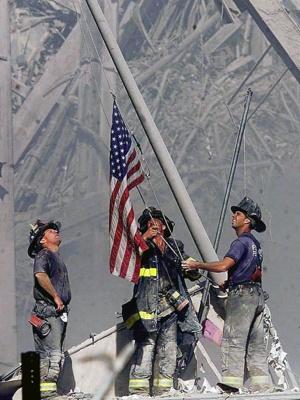 This iconic picture of firefighters raising the stars and stripes in the rubble of Ground Zero was nearly excluded from the 9/11 Memorial Museum — because it was “rah-rah” American, a new book says.

Michael Shulan, the museum’s creative director, was among staffers who considered the Tom Franklin photograph too kitschy and “rah-rah America,” according to “Battle for Ground Zero” (St. Martin’s Press) by Elizabeth Greenspan, out next month.

“I really believe that the way America will look best, the way we can really do best, is to not be Americans so vigilantly and so vehemently,” Shulan said.

“My concern, as it always was, is that we not reduce [9/11] down to something that was too simple, and in its simplicity would actually distort the complexity of the event, the meaning of the event,” he said.

That's me, I guess, getting all vigilantly and vehemently rah-rah American and distorting the complexity of 9/11 with my simple patrioitc anger about being attacked by terrorists. Must be something missing in my upbringing.