Take a look at the picture and decide for yourselves-- old hats on the left, new ones on the right. "Marines in girly hats." It's a perfect symbol for something -- just not sure what. 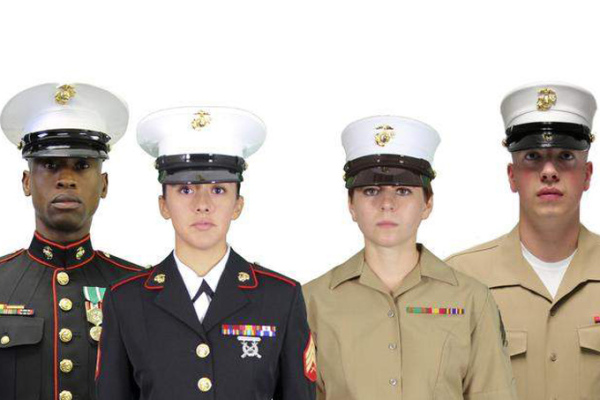 A change to the Marine Corps’ uniform hats could take the hard-nosed Leathernecks from the Halls of Montezuma to the shops of Christopher Street.

Thanks to a plan by President Obama to create a “unisex” look for the Corps, officials are on the verge of swapping out the Marines’ iconic caps with a new hat that some have derided as so “girly” that they would make the French blush.

“We don’t even have enough funding to buy bullets, and the DoD is pushing to spend $8 million on covers that look like women’s hats!” one senior Marine source fumed to The Post. “The Marines deserve better. It makes them look ridiculous.”

The thin new hats have a feminine line that some officials think would make them look just as good on female marines as on males — in keeping with the Obama directive.

They have been dubbed the “Dan Daly” hat, after a sergeant from Long Island who won the Medal of Honor in World War I.

But some Marines love the old hat, which has been in use since 1922 and think the new hat is a glorified “porter’s cap.”

“The Dan Daly cap looks too French, and the last people we want to associate our Marines with would be the French military,” wrote one commenter on the Marine Times Web site.

Coolest hats of all, of course, are the berets worn by Special Forces soldiers. Now there's a French look that's cool.

UPDATE: a marine veteran says this story is nonsense:

The President doesn't involve himself in what troops happen to be wearing.

But just to make sure, I called Headquarters Marine Corps and a spokesperson confirmed that the process for making changes to Marine uniforms hasn't changed since I last left the service in 2010.

Every year, a board (made up of senior enlisted Marines) meets and goes over things that they may want to change with uniforms. In 2007 for example, the board made a change that outlawed "sleeve" tattoos — and I don't remember thinking that was all President George W. Bush's fault.

"The President in no way, shape, or form directed the Marine Corps to change our uniform cover," said Capt. Maureen Krebs, a spokesperson for the Marine Corps. "We're looking for a new cover for our female Marines for the primary reason that the former manufacturer went out of business. The Marine Corps has zero intention of changing the male cover."