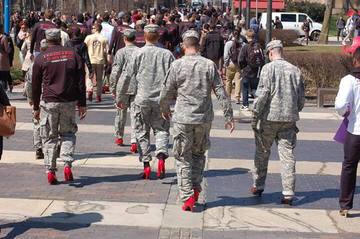 I'd gotten to the point where I thought the lunatics in charge of the nation's security could not possibly show any more contempt for the military than they already had. I'm beyond that point now:

Those who did their homework in 2008 knew that when Barack Obama was elected, all aspects of American society would suffer unprecedented levels of  left-wing lunacy, but did anyone think it would come to this?

Patriotic young cadets — America’s future warrior — pressured to walk around in bright red high heels on campus — against their will  – or face retribution.

I don’t even know what to say…

The stunt was designed to "raise awareness of sexual violence against women." That's a noble cause, and there is are good times and places and methods to do do that. This wasn't the time or the place or the method. Pray that our enemies are weaker than us, because it's becoming clear most of them aren't stupider than us.
Posted in: Current events, Politics and other nightmares