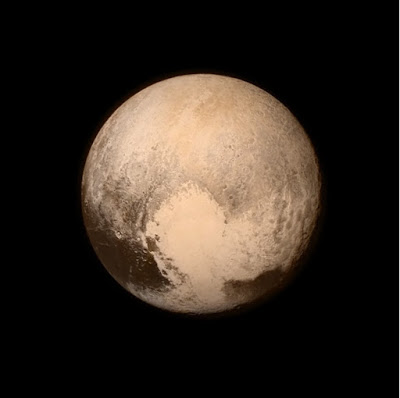 After a journey of nine years and 3+ billion miles, the New Horizons sends us the remarkably sharp photo of Pluto. How freakin' cool is that? I like Charles Krauthammer's take:

And for more than just the science, more than just the romance. Here we are, upright bipeds with opposable thumbs, barely down from the trees, until yesterday unable to fly, to communicate at a distance, to reproduce a sound or motion or even an image — and even today barely able to manage the elementary decencies of civilization — taking close-up pictures and chemical readings of a mysterious world 9½ years away.

For the wretched race of beings we surely are, we do, on occasion, manage to soar.

But there is this touch of melancholy:

Today is exactly half a century after Mariner IV flew past Mars and humans first closely viewed another planet, starting our initial reconnaissance of the solar system.

Until this week, Pluto has been nothing but a point of light in the night sky, visible only with a big telescope. Today, as the New Horizons probe zoomed past and shot some pictures of it, many have said that it will be the last time in history that we will have viewed a planet in the solar system up close for the first time.

The last first time. Kind of a great moment and a sad one, too.