OK, you got our attention

I don't know if this "defense" of free speech is spineless and cowardly or, in the writer's own words, "just being stupid," but it's infuriating in either case:

Charlie Hebdo has a long record of mocking, baiting and needling French Muslims. If the magazine stops just short of outright insults, it is nevertheless not the most convincing champion of the principle of freedom of speech. France is the land of Voltaire, but too often editorial foolishness has prevailed at Charlie Hebdo.

This is not in the slightest to condone the murderers, who must be caught and punished, or to suggest that freedom of expression should not extend to satirical portrayals of religion. It is merely to say that some common sense would be useful at publications such as Charlie Hebdo, and Denmark's Jyllands-Posten, which purport to strike a blow for freedom when they provoke Muslims, but are actually just being stupid.

I realize this is America, where we have stronger feelings for the right to speak our minds, and that people aren't quite as passionate about it in the rest of the world (the article is from the Financial Times of London), but still.  The only point of free speech is to protect speech that is offensive. Bland, unoffensive speech doesn't need protection. And I suppose it is "common sense" not to make fun of people who have threatened to kill you, but it seems pretty callous (dare I say "insensitive"?) to bring it up right now.

But at least know we know the Muslim fanatics can go so far that it provokes even our White House into calling the incident what it is.

President Obama strongly condemned the shooting and said that the United States would "provide any assistance needed to help bring these terrorists to justice." Immediately recognizing that this domestic incident as an act of terrorism was a turnaround for the White House. The administration initially hesitated to use that label after the 2009 Ft. Hood massacre and the 2013 Boston Marathon, waiting until an international connection could be proved.

Maybe this will be a turnaround for a lot of people. When the original "Muslim cartoon crisis" struck in 2006, publications seemed a little reluctaant to publish anything the fanatics deemed offensive. Now, the cartoons are being republished by many, many outlets:

Every blogger, of every political stripe, be it left, right, and everywhere in between, needs to realize that freedom of speech and freedom of the press are the two keystones of your ideology, whatever it may be. You need to make a stand. You need to make these terrorists lose the ideological battle.

And the way to do that is to republish the Mohammed cartoons yourselves. Today. Right now.

Fill the world with images of Mohammed so that the terrorists realize they can never expunge them all. 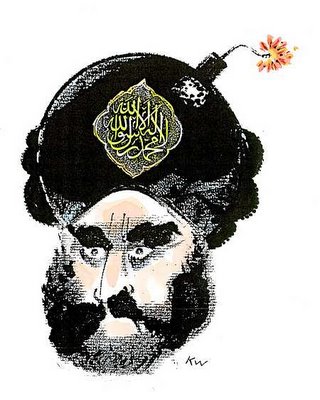